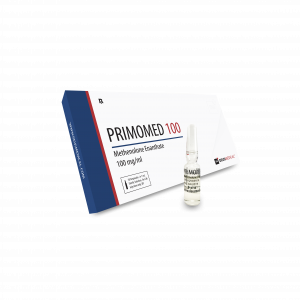 Looking to buy PRIMOMED 100 (Methenolone Enanthate)? We have Primo for sale from Deus Medical. Primo is a mild anabolic steroid mainly used for cutting or for a lean bulk.

PRIMOMED 100 (Primobolan Depot or methenolone enanthate) is the brand name for the methenolone enanthate anabolic steroid produced by Deus Medical. It is considered to be a relatively mild compound that can build very lean muscle mass. Its main effectiveness is in “cutting” cycles due to its ability to bind to the androgen receptors in the body which promotes fat burning, or during bulking phases to reduce the amount of fat during a cycle.

An interesting therapeutic/medical observation that has been reported by several researchers is that PRIMOMED 100 (Methenolone Enanthate) can promote immune system function in AIDS patients due to increased hydrogen retention. tough this effect will not prevent muscle wasting in AIDS patients, it can still help to maintain muscle mass in less severe cases, such as low-calorie diets.

PRIMOMED 100 (METHENOLONE ENANTHATE) can be run for long cycles periods of  12 weeks and even more due to its lack of toxicity and the relatively mild side effect risk and nature. Additionally, due to its long lifetime, it can be administered once per week, although twice per week is better if one wants to achieve more even blood levels.

Beginner male users are usually experimenting with 200-400mg weekly while intermediate and more advanced users can go for as much as 700mg weekly and 1000mg respectively. Most males stack it with other compounds.

Generally speaking, side effects virtually do not exist with PRIMOMED 100 (METHENOLONE ENANTHATE). Although due to it being a DHT derivative, prostate problems and the exacerbation of hair loss in users who are prone to these problems may occur, in which case one might use ketoconazole and/or finasteride to combat these effects.

Because PRIMOMED 100 (Methenolone Enanthate) does not aromatize, estrogenic side effects are not present with this one, thus the need for anti-estrogen or anti-aromatase is also not needed with this compound. Lastly, there are no signs that it is capable of causing organ damage.

In women, virilizing effects and risks are minimized if the drug isn’t used in excess.