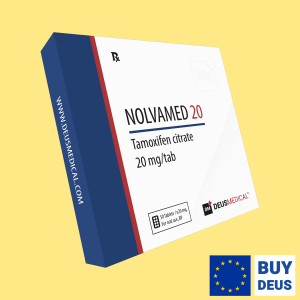 Looking to buy NOLVAMED 20 (Nolvadex)? We have Tamoxifen for sale from Deus Medical. In bodybuilding, Nolvadex Is used for a post cycle therapy (PCT) to restart the natural testosterone production after a cycle.

NOLVAMED 20 (Tamoxifen citrate) is a type of SERM targeting the Breast tissue by binding to the estrogen receptors often used to counter estrogenic effects, especially gyno, which should be combined with proper AI’s if powerful steroids are being used. Another important use of NOLVAMED 20 (Tamoxifen citrate) is as a PCT in order to kickstart and stimulate testosterone levels to increase back to normal while blocking estrogenic side effect, enabling luteinizing hormone (LH) release by the pituitary gland, maintaining the cycle gains and avoiding low testosterone effects

Nolvadex Dosage for Gyno on Cycle

During a cycle, a low dosage of just  10mg to 20mg will suffice to prevent gyno effects. If instead the effect as not as expected, it is suggested to use AI’s instead

As a PCT, the suggested cycle is 4-8 weeks, and should be preferably supplemented by HCG beforehand. Where most men are recommended 20-40mg per day for the first half of the PCT  and 10-20mg daily for the second half. It is important to note that increasing dosages above 40mg, will not produce any positive effect. We recommend keeping the dosage as low as possible.

Although generally uncommon, acne is the most likely side effect encountered. A very rare side effect is nausea or cramping of the abdomen

Where you should Buy NOLVAMED 20?

When buying Deus Medical products, make sure you buy them from an official distributor like BuyDeus.com. Make sure to only buy NOLVAMED 20  from reputable distributors like us, we also guarantee the lowest price in the market for all Deus Medical steroids, SARMs, and peptides.